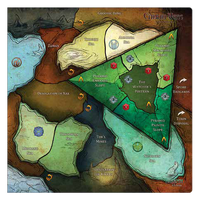 The Yuggoth Map {CW-M3} is a map released with Onslaught One. Its main mechanics are the recruitable Brain Cylinders and Slime Molds, as well as the Watcher, which is a threat to all factions but whose lair provides additional Power to players willing to risk Awakening it. A version for 6-8 players {CW-M8} was released with Onslaught Two, and also included as part of the 6-8 Player Map Packs {CW-M10, CW-M14}.

The Map is set up in the same way as the Earth Map. Place the Watcher Token at 12 on the Doom Track, with the dark (asleep) side up.

A player that Controls a Gate in the Laboratory Area may perform the Surgery Action.

Surgery (Action: Cost 1): If you Control the Laboratory Gate, Eliminate up to 4 of your Cultists in play and replace them with an equal number of Brain Cylinder tokens in your Faction's Color.
You must place these Brain Cylinders in the same Area(s) as the Cultists they replace—they can replace your Cultists on Gates, immediately retaking Control of those Gates.
You can also swap out Cultists that are not on the Map, but still in play (such as some of Cthulhu's Cultists which are Submerged, or Sleeper's Acolyte that is on a Cursed Slumbering Gate. (Those guys are just having really bad dreams).

Brain Cylinders are Cultist Units that are treated as Cultists in every way but three. They may be targeted by any Spellbooks or Abilities that target or reference Cultists without specifying Acolytes.

Brain Cylinders cannot be Recruited normally or placed on the Map due to any ability other than Surgery.

Brain Cylinders cannot use the Move action on their own. To Move a Brain Cylinder, one of your other Units in the Area must Move or use a movement-like ability that allows movement of unspecified Units, and then they may bring any number of Brain Cylinders present along with them for no additional Cost. In addition, Brain Cylinders cannot be assigned Pain results or be affected by Pain-like retreats, but they also do not prevent Units which battled their Faction from being Pained into their Area.

When a Brain Cylinder is Captured, the capturing Faction may optionally choose to Convert the captured Cylinder by replacing it with one of their own available Cylinders, instead of taking possession of the Unit for sacrifice. This still counts as a Capture for purposes of Spellbooks and Abilities.

A player that Controls a Gate in a No Slime Mold Area may take the Slime Mold Loyalty Card. They control all Slime Molds on the map. If another Faction takes Control of this Gate, all Slime Molds in play change allegiance to the new Faction. If the Gate is Abandoned, all Slime Molds become uncontrolled. This also means that they would no longer count as part of any Faction for purposes of being Pained.

The Slime Molds are Neutral Monster Units which are considered to have 1 Cost. When uncontrolled, they are also considered to have no Spellbooks, Doom, Power, or any other normal features of a Faction for any purposes. They may be targeted by any Spellbooks or Abilities that target or reference Monsters without requiring a faction be named.[citation needed]

Slime Molds cannot be Summoned normally or placed on the Map due to any ability other than Call Slime Mold. When Called, Slime Molds are placed into a Slime Mold Area.

Slime Molds cannot use a Move Action to go to the No Slime Mold Area, but may be Pained there or transferred there by a movement-like ability.

The Green Pyramid consists of 2–4 Areas marked with Gate Glyphs. If a faction controls a Gate on an Area with the Gate Glyph, that Gate earns 3 Power instead of 2 during the Gather Power Phase.

The Watcher is a non-player Great Old One Unit which is considered to have 0 Cost, no Special Abilities, and no Spellbooks, Doom, Power, or any other normal features of a Faction for any purposes. It may not be targeted by any Spellbooks or Abilities. It is only considered an enemy Great Old One while Awake.

At the beginning of each Doom Phase, if the Watcher is already Awake, it Decays. Roll a die and lower the Watcher Token's position on the Doom Track by that many spaces. If it Decays to 0, it is Killed and removed from the Map. Flip the Watcher token to its dark side. Do not Decay the Watcher if it Awakened in this Doom Phase.

At the start of each Action Phase, if the Watcher is Awake then it will Attack before the First Player's turn.

Once per player, in player order and starting with the First Player, the controlling player must Move the Watcher into an adjacent Area of his choice containing Faction Units. If no Faction Units are in an adjacent Area, the Watcher must be moved to an Area containing Faction Units. Immediately after moving, the Watcher initiates a Battle against each Faction in that Area, attacking them separately and independently, in the order chosen by the current controller. If the Slime Molds are currently uncontrolled, the Watcher does not attack them. Each of these Battles in a single Area count as a single Watcher Attack. Afterward, control moves onto the next player, until all players have gotten a turn controlling the Watcher or the Watcher has been Killed. After this, the Action Phase proceeds as normal starting with the First Player's turn.

Any player may initiate or participate in a Battle against the Watcher. For each Kill result, reduce the position of the Watcher Token by 1 on the Doom Track. The Watcher is immune to Pain results.

"It traced strange pictures on the quivering air—
Half-memories that had always filled my eyes—
Vast towers and gardens; curious seas and skies
Of some dim life—I never could tell where.
But now I knew that through the cosmic dome
Those rays were calling from my far, lost home."
—H. P. Lovecraft, Fungi from Yuggoth
Community content is available under CC-BY-SA unless otherwise noted.
Advertisement