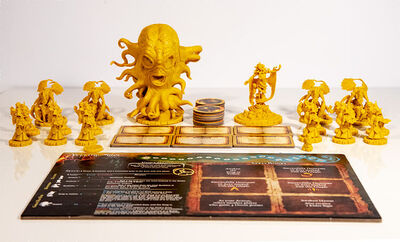 Yellow Sign is one of the four original factions for the Cthulhu Wars boardgame. It focuses on enemy assimilation and Elder Sign generation.

Yellow Sign's primary method of gaining Elder Signs is through The Third Eye, requiring Hastur and the King in Yellow to be used in concert; at the latest, Hastur should be summoned by the third round. Similarly, the use of Desecration is fundamental to Yellow Sign's strategy. As such, it's important to protect the King in Yellow and Hastur, both of which are made easier using The Screaming Dead and Shriek of the Byakhee to ensure a suitable meat-shield at all times. Yellow Sign is also quite skilled at dealing with enemy Cultists, as they will almost always have the King in Yellow out in the first few actions of the first round, meaning that they can capture Cultists before most other factions are able to build up defenses against it. Even when they are prevented from capturing the Cultist, they can still remove it from the board using Zingaya. While Yellow Sign has two GOOs, it's usually more profitable to save power for Desecration rather than spending it on Rituals of Annihilation—but this will change if the enemy factions are positioned to eliminate King in Yellow or Hastur in the next phase.

Yellow Sign has a major weakness in that its Spellbook Requirements require it to travel to known destinations. As such, enemy factions can effectively use blockades to prevent Yellow Sign from advancing. While the Yellow Sign's GOO and Monsters have excellent mobility, their Cultists do not, so they often get left in Europe until other Factions try to take the Gate. If enemies focus on instead attacking the King and routing his Undead bodyguards, it can be difficult for Yellow Sign to take advantage of Gates that it happens across during its trek.

Building your own Gate can be disrupted if another faction decides to be aggressive, but this will usually harm their prospects as well. Conversely, stealing an enemy Gate is unlikely to be possible unless the enemy is being careless, and can backfire if the enemy has enough power to summon a Combat-ready monster and kill the King.

Along the shore the cloud waves break,
The twin suns sink behind the lake,
The shadows lengthen
In Carcosa

Strange is the night where black stars rise,
And strange moons circle through the skies,
But stranger still is
Lost Carcoa

Songs that the Hyades shall sing,
Where flap the tatters of the King,
Must die unheard in
Dim Carcosa.

Song of my soul, my voice is dead,
Die though, unsung, as tears unshed
Shall dry and die in
Lost Carcosa
--Cassilda's Song in "The King in Yellow"

"I've done horrible things. I killed lifelong friends. Parents. Children. Why, you ask? Because ... the King in Yellow. He whispered ... secrets and portents. It just made sense. Don't worry, my victims didn't stay dead. They are a gift to the Unnamed One and so they follow, like the others. So the King in Yellow has his entourage as he spreads his message."
—David Mendiola