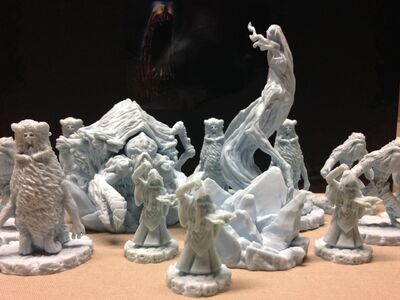 Windwalker {CW-F3} is a faction released with Onslaught One. It focuses on building up strength until the late game, and then blitzing across the map in a push for the winning points.

Elder Sign Acquisition - Windwalker has several great ways to acquire Elder Signs. The primary source is going to be your ritual when performed with both faction GOOs on the map. Herald of the Outer Gods locks this cost in at 5, making it an absolute must every round after both GOOs are summoned. The second is his spellbook requirement which can yield up to 3 Elder Signs when taken after 3 other factions have 6 spellbooks. Do the best you can to wait for this opportune moment.

Offense vs. Defense - Some factions in Cthulhu Wars are better at one or the other, but Windwalker in particular has both a powerful defense and offence. Typically, WW plays defensively in the early to mid game, then transitions to offensive late game if needed (it may not be!). Focus on Herald of the Outer Gods (see below) to further your position on the doom track in the mid and late game, while using Ice Age and Rhan Tegoth (with his eternal ability) to make your starting areas difficult to assault.

When Ithaqua and your Gnoph Keh are on the board, now you have the option for strong offense. Look for an opportune time to strike. If it looks like you will need to end the game with a big round (lots of gates in the doom phase) then try and hibernate a good amount of power the round before. This will ensure you are have a good amount of power to go on the offensive when others are low. Try to focus on gates controlled by other leading players, taking them down while building yourself up might be the difference between a win and a loss.

Cannibalism - This works even in battles where you where not involved. Be watchful!

Windwalker is not the easiest faction to open with. If you look at how you can achieve spellbooks your goal is definitly set on building a gate at the opposite pole you are started at. Maybe and i say maybe early hibernating in the first round can grab you that first player next round but this strategy is quite risky. The downside of early hibernation is that the field is open for the other players the gain ground towards you or even grab some of your cultist. Missing that start player goal will set you trailing other players for big chunks of the game and big change you never catch up.

Easiest way looks like to move 1 cultist 3 times towards the opposite pole and build that gate with your fourth action. Any enemy monster or GOO following your trail just grab that cultist and take that gate for their own good. So you need somehow have to protect and conceal that obvious strategy. But how? Convoying your cultist with a monster or any other strategy will lack you power for gatebuilding. Making this opening a 2 turn strategy. So move 1 cultist, build a gate, build wendigo and additional moves towards the opposite pole is what you can do in turn 1. With a bit of luck you can build that gate at the opposite pole in turn 2 and a good timed hibernation can bring you at 2 spellbooks at the start of turn 3.

Timing when to hibernate is of the essence. If opponents slowly spent power it will need a more patient strategy. First move a cultist to a adjacent area and build a gate, protect it with a Wendigo. You still have 3 power left now. Time to check if Hibernation is a save thing to do at this time. If not build another wendigo and check again.

Which spellbook to pick first? Cannibalism, Howl or Herald of the Outer Gods ''''are the more early game spellbooks. At the moment you can summon Ithaqua the Arctic Wind spellbook will allow you to change your strategy to the offense. The general tips point out clearly what the WW powers are.

Let the walkers ice the world and there will be peace.