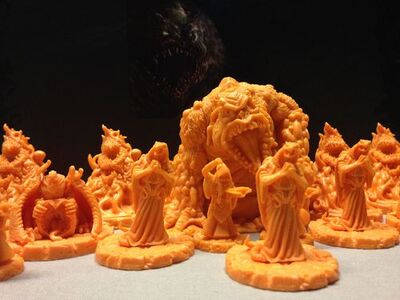 Sleeper {CW-F2} is a faction released with Onslaught One. It focuses on staying dormant until the enemies are exhausted, and then cleaning up the map while they're defenseless.

When the men...went down into N'kai's black abyss with their great atom-power searchlights they found living things—living things that oozed along stone channels and worshipped onyx and basalt images of Tsathoggua. But they were not toads like Tsathoggua himself. Far worse—they were amorphous lumps of viscous black slime that took temporary shapes for various purposes. The explorers of K'n-yan did not pause for detailed observations, and those who escaped alive sealed the passage leading from red-litten Yoth down into the gulfs of nether horror. Then all the images of Tsathoggua in the land of K'n-yan were dissolved...and the cult was abolished forever.
--H.P. Lovecraft

Of course it all started with a dame. I don't even need to tell you that, do I? It always starts with a dame. This one had a creepy vibe to her I just couldn't place. I felt she regarded me the way a female praying mantis sizes up a potential mate.
So, she comes knocking on my office door that evening, just as I was getting ready to throw in the towel for the day. As usual, the only phone calls I'd received that whole afternoon were bill collectors and irate drunks. She comes in slinking like an alley cat in heat; gloved fingers tracing lightly over every tchotchke littering this dump.
I motion her to the chair in front of my desk, and try to get to business. I'm expecting the usual: cheating spouses, familial squabbles... I shoulda been so lucky.
A few cool pleasantries are exchanged, and then the weird really begins. She starts in about her uncle who just kicked off. Implies the guy used to be into weird stuff, and she's trying to track down his more... esoteric... possessions. I'm thinking we're talking about vintage Russian snuff films on Betamax, but no. She starts in on an old book. I couldn't spell the thing's name, but she corrected me as "pnakotic." Apparently written by a sorcerer from, get this, Atlantis. Written by "Klarkash-Ton". Of Atlantis, I guess.
So I'm thinking that what I've got is a class-A fruitcake, with an extra helping of nuts. Then something happened that at once made me think I didn't want anywhere near this case.
I'm sitting, nodding, trying to come up with an excuse to get her out of my office without too much drama when I catch a sliver of movement out of the corner of my eye. Something slinky and black—I figure it's the neighbor's cat. Then the room goes dark. I spin in my chair, and there's this... don't know how to describe it. This black gel, ropy black slime which—I'm serious here—is climbing all over the windows, blacking it out. And there's a crack, and then a smash as the window implodes inward. This formless goop comes thundering through the window, a seemingly endless volume. I grab my trusty .44 and pop off a couple of rounds, but it's like shooting jello. It goes right for the dame. It bumrushes her, and she's screaming for a couple seconds, and then she is completely engulfed.
Now everything is quiet. I'm standing there with my gob hanging open as the blob oozes back to the window. I swear it smirked at me—it didn't have a face, but its surface twisted up like a mad grin. One dropping tendril reaches slowly towards me and I leap back—it stops and waves. The thing takes longer to squeeze out the window, because, just like a python that swallowed a moose, there's a spastically-twitching bulge in the middle. After a few seconds the dame must have run out of air, because the twitching stopped.
I feel like I should report this, but I never even got the dame's name.
—Ben Monroe

"The end came unexpectedly. I always thought it would be zombies or aliens or nuclear weapons. Instead, it was this ooze. It was as if the earth itself was falling apart, bleeding black tar. You couldn't fight it any more than you could fight the ocean. Slowly, but surely, the ooze dragged us from our homes, from our families. It dragged us to that awful beast's waiting maw. I can still see it, every time I close my eyes."
—David Mendiola