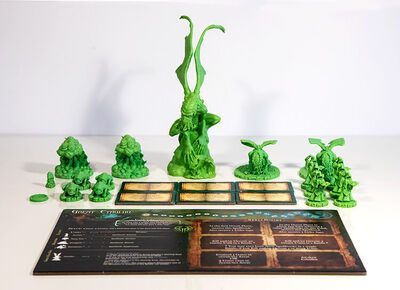 Great Cthulhu is one of the four original factions for the Cthulhu Wars boardgame. It focuses on combat and ocean control.

Elder Sign Acquisition - Cthulhu gains Elder Signs each time his faction awakens ANY Great Old One. In the early game, it is best to avoid Cthulhu's death. If such an event occurs, the blow is softened by the bonus Elder Sign. However, gaining this ES is often more expensive than performing a Ritual during the Doom Phase (1 power to submerge / unsubmerge, 1 power to declare combat, 4 power to resummon. 6 total power required). In the later rounds when the Ritual of Annihilation is expensive (7+), and especially if you sense the final action round is upon you, sending Cthulhu to his death once or twice an action phase is a valid strategy. Also, if there arises a situation where you have to kill either a 3 cost Star Spawn or a 4 cost Cthulhu, then it may likely be a better choice to kill Great Cthulhu instead and bring him back with that Elder Sign.

If Neutral Great Old Ones are involved in the game, Cthulhu receives a fantastic bonus of one Elder Sign each time a Neutral GOO is summoned. Often times this costs a mere 4 power which is almost always worthwhile.

Other Notes - Cthulhu has the strongest orientation towards combat of the base game factions. His monsters bring incredible combat abilities to bear cheaper than his opponents. Perhaps more than any other Great Old One, Cthulhu's spell book choices can easily affect the emergent nature of the game, specifically with Dreams and Y'ha Nthlei. Cthulhu can only be awakened in the South Pacific, so he can be the faction that is most tied down to a particular area. While Cthulhu does have strong combat abilities, do not ignore his powerful non-combat spell books like "Dreams." Unlike other factions, Cthulhu generally is not building towards one big turn, but instead is building for a constant, steady stream of points from both Gates and Elder Signs from awakening Cthulhu.

Cthulhu always begins play as the first player. This is a double-edged sword, as you get first pick for control of any adjacent areas, but other players have the opportunity to react to you. An common trap is to go for immediately building 2 Ocean gates; while you do get your "Control 3 Ocean Gates" requirement (maybe taking Devolve), you're left without any power, and other players can safely take your gates. Having Devolve can make them even more appetizing, since it makes your gates cheaper, freeing your enemy up to do other things. However, if you can pull it off, you'll be in a strong position for Turn 2.

Playing as Cthulhu also generally depends upon awakening him fairly soon. His combat power is formidable in the beginning of the game, but the static value means that he loses some of his combat relevance as the other players' Great Old Ones are becoming much more powerful. Because Cthulhu is largely hoping for a slow-burn victory, he'll need to act as an enforcer to keep the other players from having too big of a turn in the early game. Summoning Cthulhu really aids in this, especially if you've chosen "Submerge" as your spell book.

Playing with High Priests gives Cthulhu a lot of flexibility at the start of the game. You can bring it out, and then either a 2nd gate, or some monsters, and enter the 2nd turn with enough power to both Awaken Cthulhu and either move/attack, bring out more monsters, or Submerge off the board for an explosive Turn 3.

It may take this form:

When the other people at the table know better then to leave you alone. Sometimes its best to shoot for a solid foundation and go for summoning Cthulhu on turn 3. If doing this look out for opportunities if people greedily expand close to you early. Focus on holding your starting area and adjacent territory to maximize the later cthulhu summon.

Expansion Synergies: Ghasts cost 2 power for 4 units. Mother Hydra's spellbook re-summons all your cultists for 1 power. Combined with Devolve, converting 4 Cultists into Deep Ones will only cost 1 power overall. However, combined with Absorb...

Combined with Submerge, you have a Cthulhu Nuke.

If playing with Neutral monsters, Leng Spiders make a great accompaniment to your first Battle with Great Cthulhu. Why? The ability of Leng Spiders is to trade 2 Pains for a Kill. Therefore, in your first Battle you will gain 1 Kill with Devour, and then need to roll 2 Kills or 1 Kill and at least 2 Pains (which are exchanged for a Kill thanks to the spiders) to complete all spellbook requirements about killing units in Battle (assuming you attacked an area with at least 3 enemy units).

These Great Old Ones, Castro continued, were not composed altogether of flesh and blood. They had shape - for did not this star-fashioned image prove it? - but that shape was not made of matter. When the stars were right, They could plunge from world to world through the sky; but when the stars were wrong, They could not live. But although They no longer lived, They would never really die. They all lay in stone houses in Their great city of R’lyeh, preserved by the spells of mighty Cthulhu for a glorious resurrection when the stars and the earth might once more be ready for Them. But at that time some force from outside must serve to liberate Their bodies. The spells that preserved Them intact likewise prevented Them from making an initial move, and They could only lie awake in the dark and think whilst uncounted millions of years rolled by. They knew all that was occurring in the universe, for Their mode of speech was transmitted thought. Even now They talked in Their tombs. When, after infinities of chaos, the first men came, the Great Old Ones spoke to the sensitive among them by moulding their dreams; for only thus could Their language reach the fleshly minds of mammals."
—H.P. Lovecraft

<<<Begin Transcription>>>
First Voice: Okay, let's take a look at what the boys from Geology sent up.
Second Voice: This is a weird one. Seriously, this could make our careers. It's a ... glob is all I can think of... that shares qualities of both the mineral and biological.
First Voice: What? That's not even possible. It's a little early for April Fool's Day, you know.
Second Voice: Just look at this, and then make up your own mind. This sample was just thawed out, but there's more in the freezer. Look ...
<<<sound of something opening, a slithering sound, and then the sound of something heavy and soft landing in presumably a metal dish>>>
...this oily iridescence? A thin, silicon-based secretion. But, the jelly substance underneath it? It's solid muscle tissue. And here's where it gets neat: the silica gel is being secreted by the muscle.
First Voice: Are you sure? That doesn't sound possible.
Second Voice: Okay, I'm going to cut this bugger open. See this?
First voice: It's self-healing? The incision's sealing up as you cut it.
Second Voice: Indeed. It doesn't really react to fire, but goes dormant in cold. However, the slime doesn't freeze.
First Voice: Wait, did you see that?
Second Voice: What? See what?
First Voice: I swear I just saw it ... twitch? Flex? Move in any case.
Second Voice: It did! Look! It's... rippling?
First Voice: Look how it moves, like a worm. Flexing internal musculature to slide across the dish. It almost looks like it's going to... GAAAAAAAAH!
Second Voice: Mother of God!
First Voice: Get it off me get it off me! It's burning! Burning my face!
Second Voice: I'm trying! I'm ... Ahh! its eating through my gloves!
First Voice: Get it oh god oh god oh god my eyes my throa...
<<<voice degenerates into bubbling chokes here.>>>
Second Voice: I don't know what to do! It's getting bigger! It's growing... oh, god, eyes, and tendrils... is that a mouth?
<<<Sound of tendrils(?) whipping through the air.>>>
First Voice: Kkkkill mee...
<<<A crash, a scream, and a slithering, slobbering cacophony...>>>
<<<End Transcription>>>
—Ben Monroe

"It was gargantuan. A mountainous form rising from the sea, surrounded by lesser monstrosities that oozed and dragged themselves toward us with distorted limbs, tentacles, and pseudopods. When we heard that the Pacific Islands were empty, we didn't understand. We still thought in human terms. We hadn't considered that the colossal Thing had been eating, scouring the islands of life. And now it was here, hungry again."
—David Mendiola