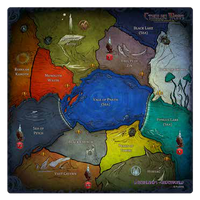 The Dreamlands Map {CW-M2} is a map released with Onslaught One. Its main mechanics are the Citadels, which provide an alternate victory condition, and the Bhole and Zoogs, which are threats to all factions. A version for 6-8 players {CW-M7} was released with Onslaught Two, and also included as part of the 6-8 Player Map Packs {CW-M10, CW-M14}.

There are four Tunnel Glyphs on each map, marked "A", "B", "C", and "D". An Area with one of these Glyphs is considered adjacent for all purposes to the Area on the other board with an identical Glyph. Tunnels are the primary means of traveling from one map to the other, but Movement-type abilities like Avatar, Seek and Destroy, Submerge, and Horror Steed allow free movement between both boards.

The Bhole is a non-player Terror Unit which is considered to have 0 Cost and no Spellbooks, Doom, Power, or any other normal features of a Faction for any purposes. It may not be targeted by any Spellbooks or Abilities.

At the end of each Doom Phase (after everyone has had a chance to perform a Ritual of Annihilation), check for the Bhole's Activation and Attack.

If it is in an Area containing a Gate, it destroys the Gate and Eliminates any Controlling Unit. This Elimination counts as an enemy Eliminating your Unit (activating abilities like Passion). If it is in an Area without a Gate, roll a six-sided die and Move the Bhole to the Underworld Citadel whose label matches the die result, then destroy any Gates present and Eliminate their Controlling Units. The Bhole does not affect anything else in its Area.

Any player may initiate a Battle against the Bhole. A Kill result will Kill the Bhole, while a Pain will send it to the Vale of Pnath, regardless of normal Pain rules. Units who Battled the Bhole cannot be Pained to its Area. If it is already in the Vale of Pnath, it ignores the Pain. If the Bhole is Killed, a new Bhole reappears in the Vale of Pnath at the end of the Doom Phase, destroying any Gates present there and Eliminating their Controlling Units.

The Zoogs are non-player Monster Units which are considered to have 0 Cost and no Spellbooks, Doom, Power, or any other normal features of a Faction for any purposes. They may be targeted by any Spellbooks or Abilities that target or reference Monsters without requiring a faction be named.[citation needed]

At the end of each Doom Phase, after rolling for the Bhole, check for the Zoogs' Activation and Attack. Roll 1 die for every Zoog that is not in play, then place each of these Zoogs on the Citadel matching their die result. When a Zoog appears on a Citadel containing a Controlled Gate, the Gate's Controller must immediately Abandon that Gate. Control may not be regained until the Zoogs are removed from that Area.

Any player may initiate a Battle against Zoogs. A Kill result will Kill the Zoog, while a Pain result will Eliminate but not Kill the Zoog, but will also inflict a Pain on the attacking Faction. Kill results are applied before Pain results, as normal. Units who Battled Zoogs cannot be Pained to Areas containing Zoogs. If a Zoog is Moved to a non-Citadel Area, such as by Howl or Avatar, it is Eliminated.

"Ninety aeons ago, before even the gods had danced upon its pointed peak, that mountain had spoken with fire and roared with the voices of the inner thunders. Now it towered all silent and sinister, bearing on the hidden side that secret titan image whereof rumour told. And there were caves in that mountain, which might be empty and alone with elder darkness, or might—if legend spoke truly—hold horrors of a form not to be surmised."
—H. P. Lovecraft, The Dream-Quest of Unknown Kadath
Community content is available under CC-BY-SA unless otherwise noted.
Advertisement