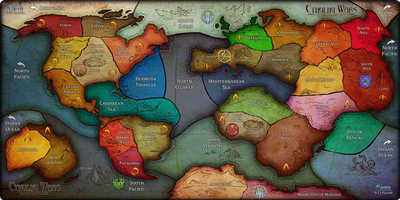 The Core Game includes the primary components for the four basic factions:

The Earth Map has no special rules. For the generic Cthulhu Wars rules, see Strategy:Main Page.

The time would be easy to know, for then mankind would have become as the Great Old Ones; free and wild and beyond good and evil, with laws and morals thrown aside and all men shouting and killing and reveling in joy. Then the liberated Old Ones would teach them new ways to shout and kill and revel and enjoy themselves, and all the Earth would flame with a holocaust of ecstasy and freedom.
—H. P. Lovecraft

Prophets, philosophers, and madmen all saw the coming of the end of the world. For years they'd tried to warn us with their indecipherable scrawlings and conspiratorial whispers; the signs were obvious enough, and in retrospect they should have been easy to see. In those dark days, mankind seemed to have had a death wish. Long had we been poisoning the air we breathed, the water we drank, and the Earth from whence our food came. Wars, famine, and plague stretched cancerously across the globe, and death followed inexorably behind.
Certainly, a few cared. These foolish, kind-hearted souls tried to stem the tide, tried to reverse the damage we'd done to the planet, but it was all for naught…for the Old Ones had other plans. They'd come from the stars during the infancy of the world, when Earth was nothing but chaos, magma, and churning elemental nonsense. Their inexplicable agendas were never made clear, but eon by eon, epoch by epoch, they shaped this doomed outpost more to their liking. And, by the end of the world, they'd finally completed their conflicting, yet eerily compatible agendas. The poisons, waste, and radiation had served to make the Earth more hospitable to them, more to their pleasures. As the stars aligned to herald the return of the Old Ones their influence grew, hastening the sickness of this primitive planet.
Finally, the Wars. The alien horrors of the Old Ones barely had to lift a claw or tentacle. It simply took a psychic nudge here, a rumbling emanation there, and mankind did the rest. Wars erupted, flowing forth from the Third World, and engulfing the streets of the First. Massacres on Main Street were the norm. Strange new weapons were developed to attempt to stem the tide, but nothing prevailed. Men, women, and children ran through the streets, shouting, killing, burning, and destroying. Blood flowed in volumes unparalleled in human history.
As the Old Ones rose from their eons-long slumbers, the world burned with a holocaust of ecstasy and freedom. For moments, all was silent, as if all of existence held its breath...
Thus began the real battle...