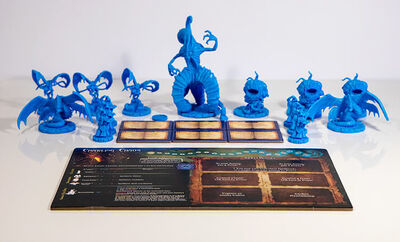 Crawling Chaos is one of the four original factions for the Cthulhu Wars boardgame. It focuses on mobility and assassination of enemy Great Old Ones. Remolded Nightgaunts with increased durability {CG-B1} were later made available for purchase.

Crawling Chaos is weaker at first, taking some time to acquire its first few Spellbooks, so should focus on defensive play and looking for opportunities to capture Cultists early in the game. However, it is usually able to complete its Spellbook collection before other factions, at which point it becomes an offensive behemoth skilled at generating extra power, making Rituals more affordable.

Crawling Chaos's primary method of gaining Elder Signs is through the Harbinger, requiring the faction to attack enemy GOOs several times to stand a chance at winning. This is far easier when playing with Independent GOOs, who are generally weaker in combat. Bokrug and Y'Golonac are particularly appetizing targets, but take care to avoid Y'Golonac's The Revelations. Because of this, it is important to keep Nyarlathotep alive at all costs using Invisibility and Seek and Destroy—until the final Doom Phase, at which you should go all out attacking enemy GOOs. To ensure that The Harbinger lands, use Abduct and Invisibility to remove as many non-GOO enemies from the battle as possible. Between Flight and the Harbinger, Crawling Chaos is the best faction at precision strikes, which can be used to extract deals from other factions in return for assassinating a major threat.

Crawling Chaos has a major weakness due to two of its Spellbook Requirements, which require it to spend 4 and 6 power as actions, respectively. It may be worth putting off the 6 power requirement until you get a high roll with the Thousand Forms. As such, obtaining Power is more important for Crawling Chaos than any other faction, which is helped along by summoning Nyarlathotep as early as possible—but enemy factions will realize this also, and will usually work to prevent Crawling Chaos from gaining power through the Harbinger or the Thousand Forms. In addition, while the faction has formidable defensive capabilities against small skirmishes, it falters against major assaults and has no method of deterring capture of its Cultists.

I remember when Nyarlathotep came to my city—the great, the old, the terrible city of unnumbered crimes. My friend had told me of him, and of the impelling fascination and allurement of his revelations, and I burned with eagerness to explore his uttermost mysteries. My friend said they were horrible and impressive beyond my most fevered imaginings; that what was thrown on a screen in the darkened room prophesied things none but Nyarlathotep dared prophesy, and that in the sputter of his sparks there was taken from men that which had never been taken before yet which showed only in the eyes. And I heard it hinted abroad that those who knew Nyarlathotep looked on sights which others saw not.
--H.P. Lovecraft

Between the bums and the criminals, nobody ever really understood why San Francisco had become the tech-hub of the universe. But it was, and we were hooked. Every shiny new gadget debuted right in our backyard, and we snapped them up as fast as they could make them.
So it really came as no surprise to anyone when the most mind-shattering personal electronic device to hit the street yet was going to be unveiled at Moscone Center. I had a pal who'd been reading up on it, and he told me this thing was going to change everything we knew—everything we thought such a device could be. It was beyond the childish tinkering of the internet, smart phones, and such feeble toys. It would take humanity to the next level of consciousness-altering communications. A true gestalt experience, in which every mind was linked with every other. One mind, one thought, one voice.
We filed eagerly into the auditorium. Taking clean, plush seats, the throng buzzed with excitement as we guessed excitedly about what this could be. Suddenly there was a hush, and nervousness replaced excitement as the great man himself took the stage. There he was in his trademark turtleneck and jeans, looking for all the world even better than before the cancer had eaten away at him. The press called it a 'miraculous recovery.' How little we truly knew.
As the keynote began, something odd happened. Our benefactor relinquished the stage to a man none of us had ever seen before. Tall and dark, his eyes glinted like starlight as he approached the podium. He smiled as he began to speak resonantly about the world, the device, and his plans for both. His accent was liltingly middle-eastern. It immediately put us all at ease, with its strange soporific quality.
After that, I remember little. I recall the lights blinking out, and then the images pouring from the projectors at the stage. It was a sickly glow, one that made me feel uneasy and slightly ill. But I could not take my eyes off it. Images splashed across the screen at an agonizing rate—a kaleidoscopic splattering of baroque horrors. I felt myself drawn further and further into the abyss of mania streaking across the screen... after, I don't know what happened. The next thing I recall is walking down Market Street in a daze. The sky overhead was sickly and tinged with green. Droplets of slime oozed over every surface. The city was abandoned, silent... dead. In my peripheral vision, I saw inhuman shadows cavorting in a strangle alien dance.
—Ben Monroe

"The uncertainty is the worst. No one looks up. I remember when we could see the sun. You can't now, because They blanket the sky. No one wants to look up, and They know that. Everyday we live with the knowledge that it might be our last day. The only warning is a slither of sucking wind, flapping of wings, or the brush of something utterly alien on your skin. Then you're gone. I see fewer and fewer friends as time passes. How long before it is my time?"
—David Mendiola