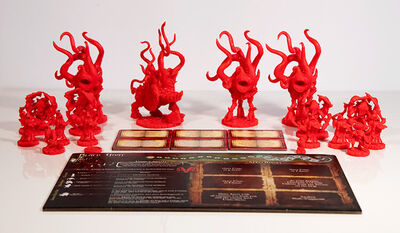 Black Goat is one of the four original factions for the Cthulhu Wars boardgame. It focuses on monster summoning and spread tactics.

Elder Sign Acquisition - Blood Sacrifice will be a staple spellbook for your faction. Ensure that you have this ready the very first doom phase after awakening Shub Niggurath. This will typically net you 4 to 5 elder signs over the course of an average game.

Avatar - Shub Niggurath is a great offensive tool early to mid game with her Avatar ability. After factions start to bolster their defenses and gain unlimited combat, Avatar's effectiveness wears off, so be sure to use it for early game advantage!

When a Gate is protected by a single monster, Avatar that location. The enemy now has to make a difficult choice. Either they:

Dark Young - These monsters are a staple of your faction. In round one, you can get the Red Sign spellbook and begin to control and defend gates with a single monster that is not vulnerable to capture. Not only this, but they will also provide you power for the rest of the game, eventually paying for themselves once or twice over (with the Red Sign spellbook).

The Dark Young, powered by the Red Sign, are also uniquely equipped for aggressive action in the first and second round. If you have people building gates nearby, you can move a single monster in an attempt to capture and battle out the opponent. When victorious, you can now control the gate with your monster.

Pros: you begin to acquire Elder Signs in the 2nd Doom Phase. Your 2 initial gates are somehow defended against capture. It is slow enough to wait for an enemy's mistake (leave a gate undefended in round 1). You can redistribute your cultists after sacrificing them. You can still get your DYoung's perks in round 3.

Cons: you have no dice. This can be a problem against some factions like OW or YS. In round 2 you have one gate with a very weak Ghoul to defend it.

Opening with a High Priest. Shub in Round 2.[]

Use it always unless Tcho-Tchos are in the game.

After summoning Shub, you have 3 power left and a high priest. Rather than the safe approach above, look for opportunities to steal gates. You can avatar, capture and recruit with those 3 power.

You need the 1000Young and Red Sign spellbook as soon as possible. You can do the "sacrifice two cultist" and the "four area" requirements. Once your DYs are cheap, summon them and with RedSign, they will give you power the rest of the game.

Pros: you begin to acquire Elder Signs in the 2nd Doom Phase. The sooner you get your HP the more energy you'll get throughout the game. You can still get your DYoung's perks in round 3.

Cons: you have no dice. This can be a problem against some factions like OW or YS. In round 2 you have one gate with a very weak Ghoul to defend it.

Used the most effectively with Ancients, Sleeper, or Tchio-Tcho in the game, bartering for Power to attack an enemy of their choice. Ancients is an ideal ally, as they can also give you Power for the next Action Phase via Worship Services.

Pros: You force other players to spend their power less economically to safeguard against you, otherwise guaranteeing yourself the ability to steal another Faction's second Gate without spending Power to build it, and possibly a third.

Cons: Make not be feasible if no Faction builds a second Gate within two Areas away from your starting Area. Your Gates are weakly defend during the beginning of the second Action Phase. You have made at least 1 enemy.

(A Cultivated Male Human Voice)
...is the Lord of the Wood, even to... and the gifts of the men of Leng... so from the wells of night to the gulfs of space, and from the gulfs of space to the wells of night, ever the praises of Great Cthulhu, of Tsathoggua, and of Him Who is not to be Named. Ever Their praises, and abundance to the Black Goat of the Woods. Ia! Shub-Niggurath! The Goat with a Thousand Young!
(A Buzzing Imitation of Human Speech)
Ia! Shub-Niggurath! The Black Goat of the Woods with a Thousand Young!
—a recording from Vermont, documented by H.P. Lovecraft

"You can't rest these days. We have nowhere to simply lie down. Our streets are overrun with beasts, loping with cloven hooves and jackal grins. The skies are no better, filled by flying abominations dripping with fungus. I hear they take your brain. I don't know what they do with it. Eat it? They say not. Something worse. But whatever you do, don't go into the newly-grown woodlands. You'll find Them there, giant horrors all mouths and tentacles. And at the center stands the one who made Them. No, my friend, stay out of the forest."
—David Mendiola